My debut novel, Prodigal Gun, bowed today. I am just tickled as all-get-out about that. Thanks to Livia Washburn Reasoner and Cheryl Pierson for taking a chance on an unknown author and for doing an outstanding job of putting the book together. Livia’s cover captures the characters, the setting, and the essence of the story beautifully, and Cheryl is an editing goddess (except for the occasional comma fight, but we both emerged unscarred).

Folks who know me will tell you I’m hardly ever serious (except about those dang commas), but I want to break with tradition for just a moment.

For twenty-three years, I was privileged to share life with a loving, generous man. Lee was so proud of all the anthologies with my name on the cover, and I think he was more excited than I about the publication of my first novel.

Sadly, he didn’t live to see the dream fulfilled. Lee died in June.

To honor Lee’s memory, all royalties from the sale of Prodigal Gun will go to charity. He would have liked that.

All right—enough of the seriousness. On to details about the book.

A dangerous man. A desperate woman. A love no war could kill.

Widowed rancher Jessie Caine buried her heart with the childhood sweetheart Yankees killed on a distant battlefield. Sixteen years later, as a Texas range war looms and hired guns arrive to pursue a wealthy carpetbagger’s agenda, Jessie discovers the only man she ever loved isn’t dead.

At least not yet.

Embittered by a brother’s betrayal, notorious gunman Calhoun is a dangerous man, come home to do an unsavory job. A bushwhacker’s bullet nearly takes his life on Jessie’s land, trapping him in a standoff between the past he tried to bury and the infamy he never will. One taste of the only woman he ever loved puts more than his life and her ranch in the crossfire.

With a price on his head, a debt to a wealthy employer around his neck, and a defiant woman tugging at his heart, Calhoun’s guns may not be enough to keep him from the grave. Caught between his enemies and hers, Jessie faces an agonizing choice: Which of her dreams will die? 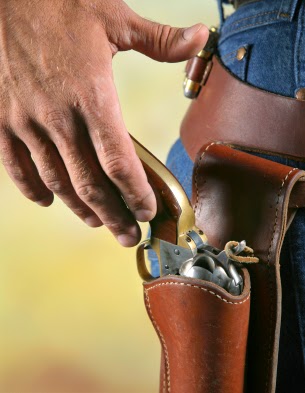 A red-tailed hawk circled in the cloudless sky, dipping one wing in a silent salute before plunging to the earth like a bullet. Twenty feet from the gelding’s hooves, a jackrabbit barely had time to shriek.

The horse tossed his head and danced a few steps. Calhoun pressed his knees against the saddle and drew the slack from the reins. “Easy, fella.” He patted the chestnut’s neck. “You’re too big for him to carry off.”

Tugging the brim of his Stetson closer to his eyes to block the afternoon glare, Calhoun settled into a lazy slouch. Texas hadn’t changed—still big and open and empty. A man could ride for days with no company but his own.

He scanned the surrounding terrain. Rocks and scrub littered the sand on both sides of the dry wash. Occasional stands of oak and mesquite interrupted the grama grass and prickly pear toward the skyline, but nothing moved. No insects or reptiles. No birds. Not even a breeze. Only the gelding’s hooves thudding against parched dirt and the creak of saddle leather violated the silence.

Too still. Too quiet. Too…empty. Unease had dogged him for the past six months, ever since the trouble in Kansas. Now, deep in the Texas Hill Country, an army of ants crawled the fringes of his nerves.

Someone hunted the hunter. Who? His gaze darted from sand to scrub to rock. “Show yourself, you son of a bitch.”

The horse’s ears swiveled to catch the mutter. Good God, you’re talkin’ to yourself.

Rubbing eyes dried by heat and fatigue, he sucked a lungful of scalding air. Two weeks of hard travel could prey on a man’s mind. Both he and the horse could use a brief rest. If memory served, a watering hole and some blessed shade lay just over the next rise.

A familiar rancor swelled in his chest. Some memories persisted despite a man’s best effort to forget.

Boggs better have a damn good reason for yanking him away from the high-dollar comfort of Miss Lavinia’s in Silver City. A wry twist pinched one corner of Calhoun’s lips. Now there was a memory to savor. The heat in New Mexico Territory could burn a man clear to his bones without leaving a mark.